Welcome to another week in the Wednesday Hodgepodge!  Hosted by Joyce at:

1. April showers bring May flowers...what have you been showered with this month?

I have actually been to a bridal shower this month as my niece K is getting married in May. I am also planning a baby shower for my other niece K who is having her first baby in August.

2. What is the nature of compassion?  Is it learned or innate?  Can compassion be learned?  If you're a parent is this something you've purposely sought to instill in your children, and if so how?

I think compassion is understanding other people and why they do what they do. One time my son was driving and he complained that an older person was driving the car in front of him. It wasn’t going quite as fast as he wanted it to go so he complained. My response was to say “Would you want someone to say that to your grandmother?” It gave him pause for thought. I believe everyone should walk in someone else’s shoes before they complain.

3. Do you prefer to watch romantic comedy or romantic drama...or are you rolling your eyes saying bring on the action flicks?

I prefer romantic comedy. I am a crier so if it gets too dramatic I use more than one box of tissue. At least if I laugh I can only use a few and be careful not to wet my pants.

4.  It's April which means baseball season is officially upon us here in the US of A. Humphrey Bogart is quoted as saying "A hot dog at the ballgame beats roast beef at the Ritz." Agree or Disagree?

Disagree! I am neither a baseball fan or a hotdog fan.

5. What's something in your community or city that needs fixing or improving?
6. Share a song you enjoy that mentions flowers or a specific flower in its title.

Roads with potholes. We live in Canada where the weather changes are dramatic and very hard on our roads.

7. April 22nd is Earth Day...do you believe there's life on other planets?  That wasn't the question you were expecting was it?

Yes there could be life on other planets just not the same as we have here on Earth.

We have been called to duty today as our grandson’s imminent arrival is happening as we speak. We will have the girls staying with us for a few days while Mom and baby bond. Last week I mentioned that I was working on blankets and outfits for all of the babies that are expected this year. I had hubby photograph a few of them. I hope you like them. 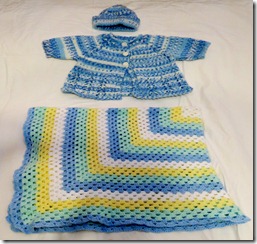 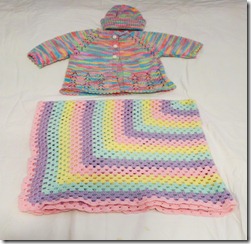 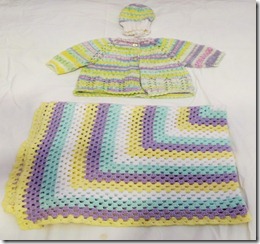 Posted by retired not tired at 9:03 AM