1. Are the leaves turning color where you live? Have they begun to fall? Will you have to rake when it's all said and done? Is that a chore you love or loathe?

Yes the leaves are turning where we are. No we don’t rake too many leaves. We actually used to take bags of leaves off our neighbours to settle around the flowers for the winter. 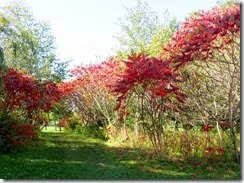 I had to ask DH for this one and he said it was last winter during the polar vortex.

3. After 20 seasons with the NY Yankees, Derek Jeter played his last official game Sunday afternoon. Jeter has been described even by opponents as a 'class act', both on and off the field. The NFL is back in action this month too, with several players in that sport also making headlines. What are your thoughts on athletes as role models? Should a professional athlete be expected to act as role model or is that going beyond their job description? What responsibility do the organizations these athletes work for have when it comes to dealing with off the field behavior? Discuss.

I am not a big sports fan. I don’t follow sports however I do get disgusted when they are in the news for things they do that have nothing to with sports.

4. What season of the year is toughest for you in terms of your health? Why?

Winter! We don;t get out for as many walks because of the ice and snow however we are looking at a cruise to the Caribbean to help with our health and to avoid the cold.

5. The top six healthy food trends of 2014 according to Eating Well are-

clean eating (more veg, less meat, less sodium, limit alcohol and processed foods)
trash fish (you know those fish that get caught in fishermen nets and are thrown back? It seems chefs are finding creative ways to make them more appetizing)
cauliflower (this year's IT vegetable)
kaniwa (essentially baby quinoa, so like quinoa only smaller)
fermentation (think pickling except with twists on flavor we're not accustomed to)
community supported food (farms operating with community support/membership).
Okay-so how many of the hot healthy food trends for 2014 have you experienced, encountered, enjoyed? Any you've tried and said ewwww? Any on the list you'd like to try before year's end?

D H and I are very conscious of the food we eat. We eat a lot more fruits and vegetables. We avoid pre-packaged foods. Cookies are homemade and usually have oatmeal in them. Most of our cooking is from scratch. I love cauliflower. Not big on quinoa.

It was wonderful while it lasted.

7. What's something on your October calendar that makes you happy just thinking about it?

Our visit to our grandchildren in South Carolina.

We are taking a different route down to see the grandchildren. We are hoping to see some colour on the Blue Ridge Parkway. I can’t believe the amount of traffic on the roads especially in Pennsylvania. Not just the trucks which you expect to see but lots of cars. We have had wonderful weather and are thankful that the thunder storm came last night after we were tucked away in our hotel.

Have a great week and thank you Joyce for hosting the Hodge Podge.

Posted by retired not tired at 7:20 AM