1. My hubs spent last weekend pheasant hunting. Are there hunters in your family? If so, what do they hunt? Which of the following have you tasted-pheasant, rabbit, venison, duck, goose? Which of those would you most like to taste, or be most willing to taste?
Vegetarians keep calm and Hodgepodge on.

2. What high spot have you visited that gave you a wonderful 'bird's eye view' of something below? 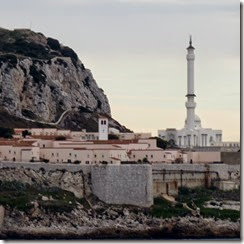 We visited Gibraltar last year and climbed up to the top.

3.  Do you have any birds in your home? These could be either real live pets or decorative, as in bird prints, knickknacks, fabric or pottery.

4. Tell about a time you 'killed two birds with one stone'?

5. Your favorite song with a bird in it's title?

Anne Murray’s “Snowbird”. She is a wonderful Canadian singer from the East Coast of Canada.

6. What most recently gave you goose bumps?

My bus trip that I took yesterday. We had a wonderful drive to the Casino. We met our friend M and spent a little money. Lunch was included and we caught up on our children’s lives as well as our grandchildren’s. On the way home we heard a bang and the bus driver pulled off of the road. The lights went out in the bus. The driver started the bus again and moved a head a little however the bus stopped again. The driver called her mechanics and was told to stay on the side of the road. Another bus was sent to rescue us. In the mean time the driver surveyed the area and felt we needed an intervention from the police.

The police came and it was determined that their crash equipment would be needed for the traffic to divert around us. The other bus pulled up beside us and we safely transferred to the other bus. We were an hour late getting home but everyone was safe.

7. Halloween is this Friday...any plans? Did you trick or treat as a child? Carve pumpkins? Share your most memorable costume.

Yes I used to dress up for Halloween when I was a child and we would trick and treat. To this day Halloween is a busy time for us and we have many costumes to chose from. DH and I are going to be California Raisins and hand out raisins to our trick or treaters.

It has been another crazy week. On Monday we had to vote for our municipal politicians. The person we voted for got in as mayor. Hopefully the next 4 years will not be as controversial as our previous mayor was. Let’s hope he doesn’t become Jimmy Fallon’s laughing stock.

Posted by retired not tired at 8:00 AM